Hadith 5 : Prohibition of Innovation in Religion

We have covered this hadith before, but I thought it’s good to give more details since, i have a few syarah to read about it now.

It is narrated on the authority of the Mother of the Believers, Umm ‘Abdullah ‘Aishah, radiyallahu ‘anha, that the Messenger of Allah, sallallahu ‘alayhi wasallam, said:

“Whosoever introduces into this affair of ours (i.e. into Islam) something that does not belong to it, it is to be rejected.”

According to the version in Muslim, (it reads): “Whosoever works a work which has for it no command of ours is to be rejected.”

Who are the mother of believers? Name them.

Memorise
This is a very important hadith and Imam Nawawi said we should memorise this hadith. Insya Allah as a reminder to us when we perform our ibadah.

This hadith is used as a criterion for judging external actions or performance of Ibadah. If an action is not done in accordance with the Shariah or the Sunnah of the Prophet, sallallahu ‘alayhi wasallam, it will be rejected and not accepted by Allah based on text of this hadith.

Hadith 1 – a criterion for judging the intentions or the internal actions of the heart.

What are the conditions of accaeptance of ibadah?

Whoever looks forward to meeting his Sustainer (on Day of Judgement), let him do righteous deeds, and let him not ascribe unto anyone or anything a share in the worship due to his Sustainer.

Emulating and following the Prophet, sallallahu ‘alayhi wasallam, is a Qur’anic obligation.

Verily, in the apostle of God you have the best example to emulate for everyone who looks forward (with hope and awe) to Allah and the Last Day, and remembers Allah unceasingly.
Surah Al-Ahzab 33: 21.

Say (O Muhammad to mankind): “If you (really) love Allah then follow me , Allah will love you and forgive you your sins. And Allah is Oft-Forgiving, Most Merciful.” (Al Imran 3:31)

Let’s not forget our lessons in Suratul Kawthar. remember those who wound not be allowed to drink from the pond in yaumul akhirah, when we are in need of the drink. The special drink from the poond that came from the river Kawthar that is given to rasulullah sallalhu alaihi wasalam.

Those who won’t be allowed to drink are those who create bidaah (innovation) in their ibadah! May Allah protect us from this.

Which one is sunnah?

Scholars classify actions of the Prophet, sallallahu ‘alayhi wasallam, into

There are clear indicators for actions done for the purpose of Ibadah such as commands to do or not to do something, warnings for not doing something, etc.

Muslims are only obliged to follow the first kind of Sunnah.

The actions (i.e.forms of ibadah) that we do should be done in accordance with the Shariah or the Sunnah of the Prophet, sallallahu ‘alayhi wasallam. Below are criterion to ensure that we will keep our actions in check:

Any ibadah that we do has to be done in it’s designated or specified time.E.g.

The Shariah has specified that certain ibadahs have to be performed in designated places.E.g.

For most of the ibadahs the Shariah has specified a certain number of times that the ibadahs or their components need to be performed. We should not violate these rules intentionally. To violate intentionally may make the ibadah subject to be rejected. E.g.

Every ibadah was described or shown to us by the Prophet, sallallahu ‘alayhi wasallam – being our best model to follow and emulate. The way that the ibadahs are performed by him have to be followed – it should not be violated. E.g.

Even the size of the stones used for throwing at the Jamrat has been specified by the Prophet, sallallahu ‘alayhi wasallam, as not to be too big

Many Muslims today violate the way ibadahs are performed, because of ignorance or because they do not bother to learn, and they end up doing the ibadah in the wrong way.

If the Shariah has specified a type of ibadah, then we should stick to that type. E.g.

Al-Udhiah (sacrifice) – the type of animal to be sacrificed has been specified by the Shariah and this should not be violated. Recently a Sheikh in one of the Muslim countries made a fatwa that Muslims can use chicken as sacrifice – this is a violation of the type. If a Muslim cannot afford to offer a sacrifice, then they don’t have to do it as it is not a wajib (i.e. an obligation). In certain years, some of the Sahabahs (companions) purposely did not perform the sacrifice so that the people did not think that it was wajib

Not all are for the purpose of ibadah
Some of done due to customs of the time
The following are some examples:

We should not follow these examples of the Prophet, sallallahu ‘alayhi wasallam, for the purpose of ibadah.

More to Ponder
1. Allah has completed the religion. Who are we to add more to it?

Today have I perfected your religion for you, and have bestowed upon you the full measure of My blessings, and willed that Islam shall be your Religion.

2. There is a hadith which tells the story of three men who only wanted to do ‘good deeds’ all the time – one said he will not get married, the second one said he will pray all night and not sleep, and the third said he will fast every day. When the Prophet, sallallahu ‘alayhi wasallam, heard this, he said that he, sallallahu ‘alayhi wasallam, was the most pious and righteous amongst the people and yet he did not do the things the way the men wanted to do them.

This shows that the actions that the three men thought were ibadah would have resulted in bid’ah as they weren’t practiced by the Prophet, sallallahu ‘alayhi wasallam.

4. He also says that if there are two ways of fulfilling an obligation, we should follow the easier way.

E.g. If the weather is cold and if we have the choice of using warm or cold water (for wudu’), we should use warm water. We shouldn’t use cold water and inflict discomfort on ourselves, trying to show that we are stronger Muslims and hoping for extra rewards.

Or if there is choice of going to two masjids (mosques) of different distances, we should go to the nearer one.

Scholars deduce that we should not attach any hardship to our ibadah hoping that it will make it more rewardable. Shariah is based on ease. Therefore we should always choose the easier way when performing an ibadah because this will enable us to do it properly – if we were to choose the difficult route then we may, after a while, find difficulty in keeping to our commitment in performing this ibadah. An attached hardship to an ibadah, which has not been specified by the Shariah, should be avoided – we should not place any hardship in performing any ibadah.

If you really think about it, there are just so much sunnah that we find hard to do because of our capacity. Why focus on hardship which is not legislated in the deen over something that is in the sunnah.

So how can I be Aware

By knowledge. let’s build our knowledge from now. Acquire knowledge and practice as much as we can. When we learn, Insya Allah, Allah will guide us to distinguish which form of ibadah is as per taught in the sunnah and which is custom. Many of us do bidaah because we think it is the correct ibadah since the one before us did the same thing. Thus awareness is the first step to amendment.

All ibadah must be practised as instructed by the Messenger of Allah sallalhu alaihi wasalam who was sent to mankind in all matters of faith and its application to the affairs of human life.

The Book of Prayers (Kitab Al-Salat)

Jabir b. Abdullah said: When Allah’s Messenger (may peace he upon him) delivered the sermon, his eyes became red, his voice rose. and his anger increased so that he was like one giving a warning against the enemy and saying:” The enemy has made a morning attack on you and in the evening too.” He would also say:” The last Hour and I have been sent like these two.” and he would join his forefinger and middle finger; and would further say:” The best of the speech is embodied in the Book of Allah, and the beet of the guidance is the guidance given by Muhammad. And the most evil affairs are their innovations; and every innovation is error.”

What happens to innovators in deen? 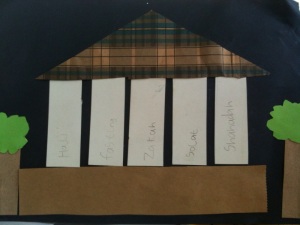 A bit of cutting and pasting of the pillars of Islam.

“Islam has been built upon five things – on testifying that there is no god save Allah, and that Muhammad is His Messenger; on performing salah; on giving the zakah; on Hajj to the House; and on fasting during Ramadhan.”

Filed under Pillars of Islam